From time to time, Janhvi keeps her fans entertained and engaged with her beautiful photos from her holiday, during festivals, shoots, projects, throwback memories and so on. The actress, who is currently shooting for the upcoming film ‘Good Luck Jerry’ in Chandigarh, took to her Instagram handle on Wednesday and shared some behind-the scene (BTS) pictures of herself, wherein she can be seen posing in the middle of a ‘sarso ka khet’.

In the photographs, the starlet is giving vibes of Shah Rukh Khan and Kajol’s ‘Dilwale Dulhania Le Jayenge’. Janhvi is wearing a white suit and a blue Phulkari dupatta. She opted for no-makeup and has just applied a blue bindi. The actress seems to have a lot of fun on the sets of the movie and is flashing her million-dollar smile.

Janhvi captioned the photos as, “Maybe I am a little filmi”. Her post has garnered more than two lakh likes, and a heart from Rajkummar Rao. Ace designer Manish Malhotra dropped heart emojis in the comment section.

The shoot of the first schedule of the movie will continue till March 2021. It is the Hindi adaptation of the 2018 Tamil film ‘Kolamavu Kokila’. Directed by Siddharth Sengupta, the movie is presented by Subaskaran and Aanand L Rai. It is written by Pankaj Matta.

On the work front, Janhvi last featured in Netflix movie ‘Ghost Stories’ and ‘Gunjan Saxena: The Kargil Girl’. She will be next seen in ‘Roohi Afzana’, and ‘Dostana 2’. 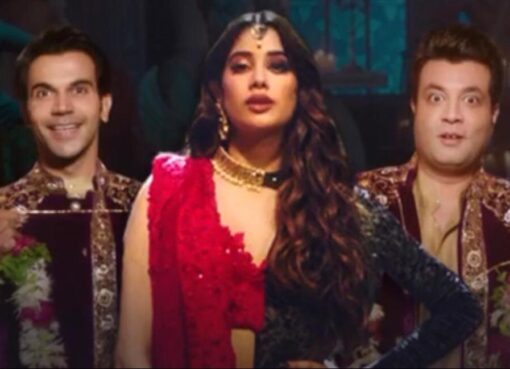 One of India’s most favourite music duos, Sachin-Jigar have reunited with the makers of the blockbuster film ‘Stree’ to spread their signature magic with the music of the highly anticipated movi
Read More