Actress Sonam Kapoor is among the stars whose style and looks always manage to set a new trend among her fans.

The gorgeous star is among the few who can rock both ethnic wear and western looks with equal panache and grace. Sonam keeps sharing glimpses from her personal and professional life on the social media and her fans love it. The diva rocks every trend like a boss. From the airport to event outings, the actress makes sure to put her best fashion foot forward.

Sonam loves to tease her fans with amazing pictures and keeps them updated regularly. As an active social media user, the star happily shares pictures of herself and things she is most passionate about. The star has managed to win millions of hearts with her impressive line of work, and impeccable acting prowess.

The ‘Neerja’ fame actress had started the shoot of her next project ‘Blind’ in Glasgow, Scotland in January. Now on Saturday, Sonam took to her Instagram handle and announced the wrap of the crime thriller.

The flick was shot in a 39 days start-to-finish schedule in Glasgow. Sonam shared a boomerang video with her team and director, expressing her happiness on the wrap of the movie. In the clip we can see Sonam and the team jumping with joy, with Sonam holding the clapper board in her hands.

The ‘Aisha’ fame had been shooting in the harsh winter season, and was sharing BTS glimpses from the sets of the movie. Sonam captioned her post as, “It’s a Film Wrap for #BLIND ! See you at the Movies! @shomemak @gairiksarkar @avishek_g #sujoyghosh”. 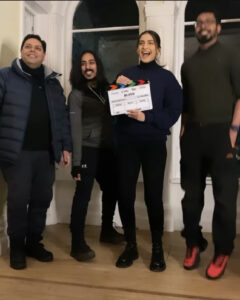 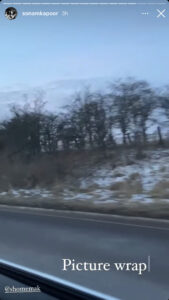 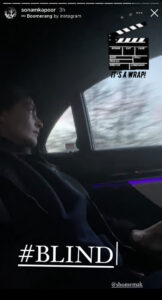 Sonam will be playing the role named Gia in the movie. The story revolves around a blind police officer in pursuit of a serial killer. The film also stars Vinay Pathak, Purab Kohli and Lilette Dubey in the pivotal roles.

‘Blind’ is the Bollywood remake of the 2011 released Korean film of the same name. Directed by Shome Makhija, and produced by Sujoy Ghosh, Avishek Ghosh, Manisha W, Pinkesh Nahar, Sachin Nahar, and Hyunwoo Thomas Kim, the movie is scheduled to release later in 2021.

On the professional front, Sonam was last seen in black comedy thriller film ‘AK vs AK’, directed by Vikramaditya Motwane. ‘Blind’: Sonam Kapoor drops happy picture with her ‘A Team’, calls it as ‘little normal’ moment!

Actress Sonam Kapoor has kickstarted the shooting for Shome Makhija’s directorial ‘Blind’ in Glasgow, and is sharing glimpses from the sets of the movie. Sonam took to her Instagram handle on Sunday a
Read More Actress Sonam Kapoor and Anand Ahuja are one of the star couples in the Bollywood who make heads turn with their stunning looks and romantic pictures.  Whenever they step out together or alone, Sonam
Read More