The excitement among music lovers is at an all-time high as celebrated singer Jubin Nautiyal teams up with the gorgeous Khushali Kumar for the very first time. Bhushan Kumar’s T-Series brings the two artists together for the romantic track ‘Khushi Jab Bhi Teri’, penned by A M Turaz and composed by Rochak Kohli.

Shot by director Navijit Buttar the music video has been mounted on a grand scale and given the big canvas backdrop of the music video, Leh Ladakh made the best location to shoot the music video of ‘Khushi Jab Bhi Teri’. However, shooting in the challenging weather and climate conditions was no easy feat for the duo.

Jubin Nautiyal, Khushali Kumar and the rest of the crew shot the music video in Leh Ladakh during the most difficult time of the year, where temperatures are known to drop to extreme lows. During this period, several experience breathing difficulties due to the oxygen levels, however, the team managed to finish the shoot successfully in three days despite these obstacles.

Jubin and Khushali had to walk to different locations due to the uneven terrain and at times over 1500-2000 steps back and forth just to reach a single destination. Despite the headaches and breathing issues they faced, the two continued shooting like thorough professionals.

Talking about his experience filming the track, Jubin Nautiyal says, “It’s always special shooting in Leh Ladakh and I’ve been there often. The locals informed us that this was the hardest time in the year owing to the extreme cold weather but thankfully we managed to film there and the video is looking amazing.”

Adds Khushali Kumar, “Leh Ladakh is as beautiful and breathtaking as it is challenging. There were times we couldn’t breathe properly and because of our looks in the video we couldn’t protect ourselves from the cold with layers of clothes. But it was completely worth all the effort because the music video and the locations in it look incredible.”

The romantic track will be out on T-Series’ YouTube channel on August 23rd. 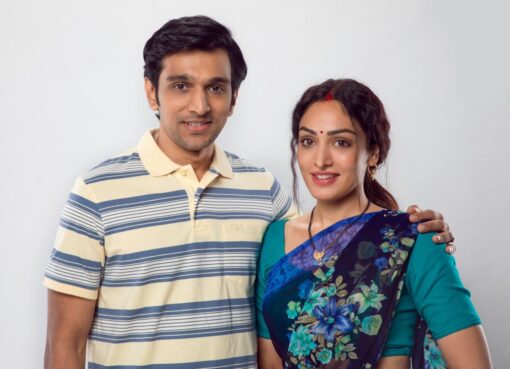 Pratik Gandhi, Khushali Kumar to feature together in a family drama; DEETS

After making a powerful impact with his performance in ‘Scam 1992’ last year, Pratik Gandhi is back as a lead in Bhushan Kumar, Shaailesh R Singh and Hansal Mehta’s next yet-to-be-titled film.  Joinin
Read More ‘Lut Gaye’ has truly been a game-changer for me: Jubin Nautiyal

Ever since ‘Lut Gaye’ presented by Bhushan Kumar’s T-Series released, the love ballad has been breaking one record after the next. Adding another milestone to its illustrious list, ‘Lut Gaye’ directed
Read More Bhushan Kumar’s T-Series has always given us tracks with impeccable storylines and stellar performances which always strikes a chord with our hearts. Such is the case with their latest track, ‘Dil Pe
Read More