Actors Kriti Kharbanda and Pulkit Samrat are head over heels in love with each other, and their social media PDA is a proof.

One of the cutest and adored couples in the tinsel town, Kriti and Pulkit give out major relationship and love goals, every time they post anything on their Instagram handle. The power couple often sets the internet on fire with their pictures. The duo, who is very active on social media, often gives us a glimpse of their happy and romantic life. Be it going on vacations, or spending leisure time with each other, the lovebirds surely never fails to win our hearts.

Recently, the duo has attended the wedding of Ullas Samrat, brother of Pulkit. The actors surely had a lot of fun at the wedding functions, as they kept on sharing glimpses on the internet. Now on Saturday, Kriti took to the photo-sharing app and shared an adorable picture with her man, wherein both can be seen dressed in traditional outfits.

The picture seems to be from the wedding celebrations, as we can spot mehendi on Kriti’s hands. In the snap, we can see Pulkit hugging Kriti, and they both are flashing their million-dollar smiles for the lens. Undoubtedly, the picture has taken the internet by storm, with their fans going gaga over their mushy romantic click.

Kriti captioned the photo as, “Mera”, followed by a heart emoji. The post has garnered more than two lakh likes. Nupur Sanon commented, “Awe!!”. Gauahar Khan wrote, “Bless u both”, “Such a lovely pic”.

Pulkit and Kriti appeared in the multi-starrer comedy drama ‘Pagalpanti’, and they had fell in love on the sets of the movie. Since then, they have bee shelling out major relationship goals to their fans by doing fun and goofy things together and sharing it on the social media.

On the work front, Kriti will be next seen in “14 Phere” opposite Vikrant Massey. The flick is set in Northern India and is directed by Devanshu Singh. Written by Manoj Kalwani, the film is slated to release next year. The movie also stars Vinay Pathak, Gauahar Khan, Vineet Kumar, Govind Pandey, and Yamini Das in the pivotal roles. While, Pulkit has stared work on ‘Fukrey 3’. 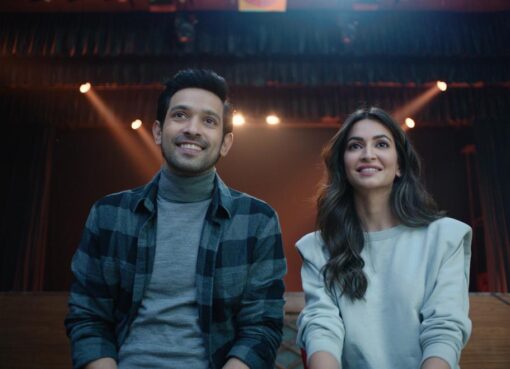 ZEE5’s “14 Phere” starring Vikrant Massey and Kriti Kharbanda is the most awaited ‘Shaadi’ film of the year, not only because we will be seeing these two together in lead for the fir
Read More Eros International on Thursday unveiled the much-awaited Hindi trailer of the adventure film ‘Haathi Mere Saathi’. On the occasion of World Wildlife Day on March 3, the makers had revealed the m
Read More