Actors Rajkummar Rao and Patralekhaa are head over heels in love with each other, and their social media proves the same. The couple never misses an opportunity to give us major relationship goals!

The couple has been dating for over seven years now, and they are often photographed by the paparazzi on outings and dinners together. They are among the Bollywood’s many power couples who make heads turn with their stunning looks. One of the cutest couples of the B-Town, Rajkummar and Patralekhaa keep on posting their loved-up pictures on social media every now and then.

The ‘Kai Po Che’ actor often shares stunning pictures with his ladylove Patralekhaa on his social media accounts. Rajkummar is one doting boyfriend who always gives us major love goals. Keeping up with trajectory, the ‘Ludo’ fame star took to his Instagram handle on Saturday and shared an alluring picture of Patralekhaa, wishing the gorgeous lady on her 31st birthday.

Rajkummar penned a sweet birthday wish for Patralekhaa, and thanked her for being his strength. He called her the most ‘kindest girl’, who inspires him everyday.

“Happy birthday my love @patralekhaa. You are the most gorgeous and kindest girl ever. The best daughter, best partner, best sister and the best friend, You inspire me everyday. Thank you for being my strength. May God bless you forever and you get all the happiness and success in the world because you totally deserve them. मेरे मुस्कुराने की वजह तुम हॊ,” Rajkummar said in his Insta post. 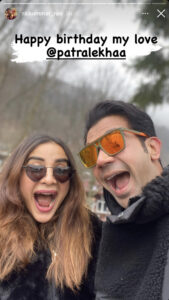 The actor’s post has garnered more than two lakh likes, and Ayushmann Khurrana dropped a heart emoji in the comment section. Patralekhaa said, “Thank you for being my strength.”

On the work front, Rajkummar will be seen in ‘Second Innings’ along with Kriti Sanon. He will be also seen next in ‘Badhaai Do’ alongside Bhumi Pednekar. Actors Rajkummar Rao and Bhumi Pednekar on Tuesday began the shooting of their upcoming comedy drama ‘Badhaai Do’.  The movie which went on the floors today, is a sequel to the National Award winning
Read More