Indra Kumar, who is known for his successful entertainers has collaborated with the ace producer Bhushan Kumar to bring together Ajay, Sidharth, and Rakul Preet for the unique slice of life comedy with a message.

Rakul Preet who has a good number of films in her kitty this year, had been shooting for ‘MayDay’ for the past few days. Now on Sunday, Rakul Singh has joined the star cast of ‘Thank God’, and began the shooting of her next project. Ajay and Sidharth have already begun the filming of the movie.

Rakul Preet is an avid social media user, and keeps her fans entertained with the updates of her personal and professional life. The gorgeous diva took to her Instagram story and shared a selfie and some videos, before the start of the shoot. In the photo, Rakul Preet can be seen donning a tank top and is gleefully smiling for the lens. She also shared a video from her vanity van wherein she can be seen getting ready for the shoot.

In another snippet, Rakul Preet is doing her morning stretching. We can hear her saying that she has too much energy in the morning. We can see how happy Rakul Preet is as she is all set for the shoot of the new movie. She captioned her photos and videos as, “Happppy face before a new film #ThankGod”, “#MorningMadness”. 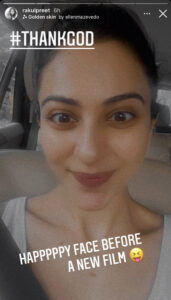 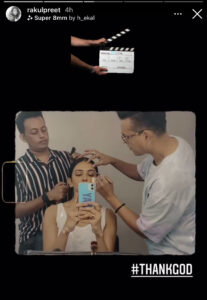 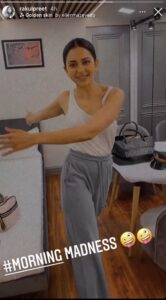 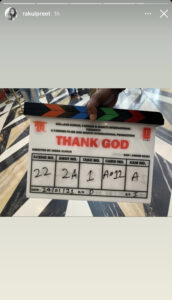 ‘Thank God’ will mark the South diva’s collaboration with Ajay Devgn for the second time after ‘De De Pyaar De’. She will also be teaming up with Sidharth for the third time after ‘Aiyaary’ and ‘Marjaavaan’ in the movie. While Rakul Preet has shared the screen with both Ajay and Sidharth, ‘Thank God’ will mark the first collaboration of Ajay and Sidharth.

Unlike any of Indra Kumar’s previous blockbusters, ‘Thank God’ will be a newer avatar with laughter and a beautiful message at the end which will connect with families and be relatable in today’s world.

Bhushan Kumar, who will be backing this exciting collaboration, had earlier said, “Thank God is a very interesting and entertaining script. Indra Kumar films are hardcore commercial laughter riots and it is a pleasure to collaborate with him and Ashokji on this one. I have worked with Ajay Sir and he aces this genre while Sidharth and Rakul will show their fans something new with Thank God.”.

On the work front, Rakul Preet will next be seen in two Tamil films : the vigilante-action film ‘Indian 2’, directed by S Shankar, a sequel to the 1996 film ‘Indian’, and the science fiction film ‘Ayalaan’ opposite Sivakarthikeyan.

She will also appear in four Hindi films : ‘Attack’ alongside John Abraham and Jacqueline Fernandez, ‘Sardar and Grandson’ opposite Arjun Kapoor, and ‘Mayday’ alongside Amitabh Bachchan and Ajay Devgan. Ajay Devgn begins filming of ‘Mayday’ in Hyderabad, film to release in April 2022

Actor Ajay Devgn who will be reuniting with megastar Amitabh Bachchan in ‘Mayday’, on Friday announced that he has kick-started the shoot of the movie. The movie stars Amitabh, Ajay and Rakul Preet Si
Read More 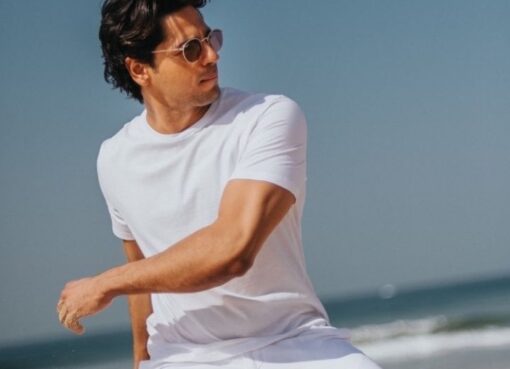 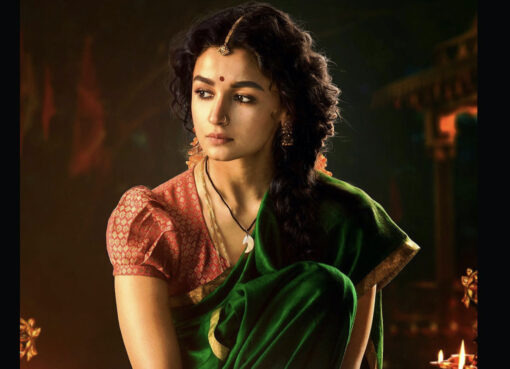 One of the most talented and beautiful new-age stars in the tinsel town, Alia Bhatt is ruling millions of hearts with her charming persona and flawless performances on the silver screen. The diva has
Read More