The actress who will be seen playing the role of an athlete in the upcoming sports drama ‘Rashmi Rocket’, is currently in Bhuj, Gujarat for the last schedule of the film. One look at Taapsee’s Instagram and you can tell the actress has given it all to get into the skin of an athlete. From intense training sessions to endless running, Taapsee has been juggling ‘Rashmi Rocket’ and ‘Loop Lapeta’.

Taapsee has undergone rigorous training and the actress kept on giving glimpses of her preparations, strict diet and workout sessions on her social media handle. The ‘Pink’ fame star who is shooting the last leg of her film, is giving sneak peek from the Rann of Kutch these days.

On Monday, she took to the photo-sharing app and shared some pictures, as she enjoys Rann Utsav, while shooting for ‘Rashmi Rocket’. In the photos, she can be seen sitting outside a beautiful tent, and is posing candidly for the camera. Taapsee can be seen in her pyjamas, and a black jacket. The diva also shared a stunning selfie on her gram story, wherein she captured the beautiful sunrise.

She captioned her photos as, “When the colours around are as vibrant as the hospitality #RannUtsav #TentCity #KachchhDiaries #RashmiRocket”, “Balcony view of sorts”, “Last sunrise to wake up as Rashmi! #lastdayofshoot #rashmirocket”, “and some how over years…watching sunrise became my favourite part of the day”, and “One Last Time..”

So from Taapsee’s pictures, it is clearly evident that it is the last day of shoot for ‘Rashmi Rocket’. 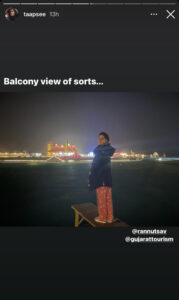 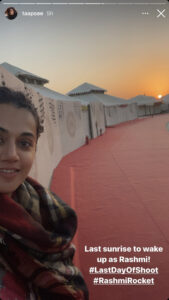 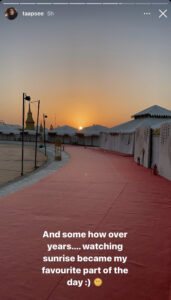 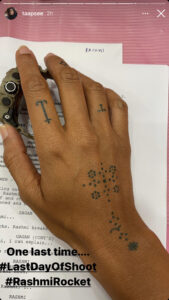 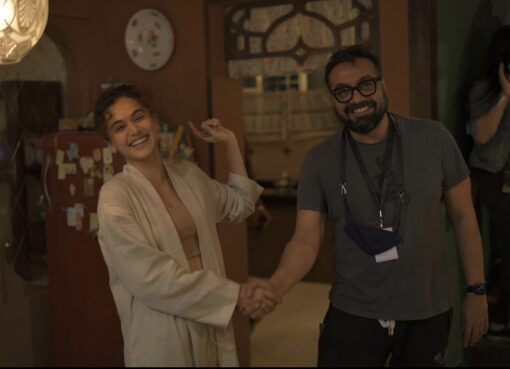 Shooting at Rann of Kutch was my favourite schedule from ‘Rashmi Rocket’: Taapsee Pannu

Taapsee Pannu starrer ‘Rashmi Rocket’ premiered on OTT platform ZEE5 on October 15th and ever since, the inspirational movie has been receiving rave reviews from critics and viewers alike! Fantastic p
Read More 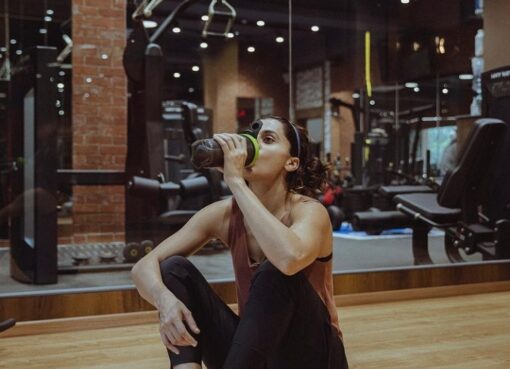