Almost a decade ago, the popular family drama ‘Sasural Simar Ka’ made its way into the viewers’ hearts as it showcased the heartwarming story of Simar and her family. At the heart of the show, there were many endearing characters that became household names including Simar and Mataji who are still revered as iconic.

After creating history on television and keeping the audience entertained for seven long years, COLORS’ milestone show ‘Sasural Simar Ka’ is set to return with the second season. In an all-new avatar, the show will chronicle the life of new (Choti) Simar (played by Radhika Muthukumar), who aspires to become a singer but her life takes an unexpected turn when she crosses path with Badi Simar (played by Dipika Kakar) and Geetanjali Devi (played by Jayati Bhatia).

A simple yet resilient girl, Choti Simar is the youngest of the siblings who grew up in the shadow of her sisters. Much like Badi Simar, she is rooted in her values and principles, but she is a present-day girl, ambitious, and dreams of making her mark in the field of music. On the other hand, Geetanjali Devi belongs to the old school of thought and is seeking an unambitious girl for her grandson Aarav (played by Avinash Mukherjee) who is willing to put her family above her dreams.

She gives the responsibility to Badi Simar to scout for a suitable match and her quest leads her to Choti Simar who is ideal yet different from Geetanjali Devi’s expectations. As their lives get interwoven and their ideologies clash, thus begins Choti Simar’s journey, of discovering a new life and relationships.

Speaking about the show, Nina Elavia Jaipuria Head, Hindi Mass Entertainment and Kids TV Network, Viacom18, “At COLORS, we truly believe that stories have the power to bring comfort, even more so in these tough times. As the nation continues to fight the pandemic, we at COLORS are constantly working towards bringing the best of entertainment for our viewers while ensuring the safety of our cast and crew. We are very happy to bring back the second season of our iconic show Sasural Simar Ka with a new storyline, old and new characters, and also strengthen the early prime time 6.30 pm slot.”

Speaking about the return of the show, Manisha Sharma, Chief Content Officer, Viacom18 said, “Sasural Simar Ka has been one of our marquee shows that tasted immense success and became an audience favourite. We are very excited to return with the second season and take the legacy of the show forward with the story of the new Simar. As the story evolves, we will see the new Simar, who resonates with old Simar’s ethos, fighting against odds, tackling different ideologies, and setting out on a new journey.”

“We are extremely happy to have Dipika Kakar and Jayati Bhatia back on the show who in every true sense contributed to the show’s success. As we renew our partnership with Rashmi Sharma Telefilms, we look forward to creating history once again,” she said.

Producer Rashmi Sharma said, “We began the journey of Sasural Simar Ka a decade ago and every time its mere mention leaves us nostalgic. The memories and success of the show are still etched in our minds and I am delighted to bring back the show that is so close to my heart. In the new season, we will introduce the audience to the new Simar played by Radhika Muthukumar and showcase her journey. It is so great to reunite with Dipika Kakar and Jayati Bhatia who have become synonymous with the show and we are having a wonderful time shooting in Agra. I hope that like Season 1, we are able to rewrite the success and win audience love.”

Dipika Kakar on reprising her role said, “Simar is a character that is not only close to my heart, but it gave me recognition as an actor. I have shared a beautiful six-year-long association with the show and the audience, and I am very excited to be back. In the second season of the show, Simar will be seen in a new avatar, who has to fulfil a very important task of finding a Bahu, her replica for Geetanjali Devi and that will set the context of the new season. There is a lot in store for the audience and I look forward to this exciting new journey.”

Jayati Bhatia on returning to the show said, “The character of Mataji from season one has something that I am recognized as even after all those years and now in season two, I will be essaying the role of her sister Geetanjali Devi. Similar to Mataji, she is also a matriarch of the family and is looking for an ideal girl for her grandson. It is absolutely a déjà vu moment for me and I am extremely happy to be back on the show. I am looking forward to working with the new cast and with Dipika Kakar once again.”

Radhika Muthukumar on playing the new Simar, said, “Very seldom you get to play a well-established character that is extremely loved by the viewers and Simar is one of them. The mere name not only induces nostalgia but also reminds us of some exceptional characters and drama that we have witnessed.  The audience has always recognized Dipika Kakar as Simar and taking that baton from her and playing Choti Simar is a huge opportunity for me. She is a simple yet headstrong girl harbouring dreams of becoming a singer. I am looking forward to the new journey and hope that the audience showers their new Simar with lots of love.”

Avinash Mukherjee who plays Aarav said, “Sasural Simar Ka is a show that has made a place in the hearts of people and I am elated to be part of the show. My character Aarav is Geetanjali Devi’s grandson who is a very balanced young man and has returned to India to take care of his family business. Currently, we are having a wonderful time shooting in Agra and I really hope that the audience appreciates our efforts.  Working with COLORS has always been an enriching experience and I am looking forward to this exciting new phase.”

Produced by Rashmi Sharma Telefilms, ‘Sasural Simar Ka 2’ will premiere on April 26 and air every Monday to Saturday at 1830 hrs on COLORS. 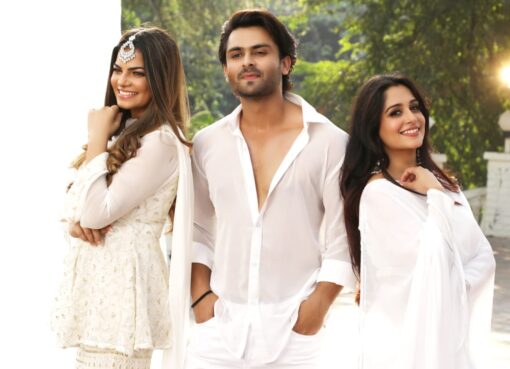