Released in 1988, ‘Coming To America’, the American rom-com that featured the comical and charming Eddie Murphy received love and appreciation from film critics and viewers alike.

The movie gave Eddie a loyal fan base worldwide, across many generations, making him one of the best actors in Hollywood in the genre of comedy. 33 years later, Eddie Murphy is back as Akeem with the sequel to the cult classic. Titled ‘Coming 2 America’, the romantic comedy is all set for a global premiere on March 5th, on Amazon Prime Video.

Talking about the sequel, Eddie Murphy says, “In ‘Coming To America’, an African prince travels to America to find a regular girl and he brings her back to make her his princess. It’s a modern fairytale that a lot of people love and also, it was the very first time they ever had a movie with Black folks, where you had kings and queens. The upcoming film is a really cool continuation of that story and I want people to have a great experience while watching it.”

Set in the lush and royal country of Zamunda, newly-crowned King Akeem (Eddie Murphy) and his trusted confidante Semmi (Arsenio Hall) embark on an all-new hilarious adventure that has them traversing the globe from their great African nation to the borough of Queens, New York – where it all began. 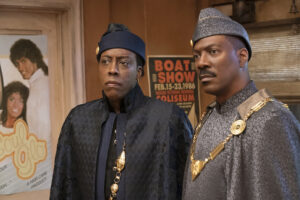 The Amazon Original Movie is all set to release globally on March 5th, while the original title ‘Coming To America’ is already available on the service for streaming.